The official club colors are red and white. Over its history, the Fire have also employed navy blue, sky blue, and black as alternate colors. 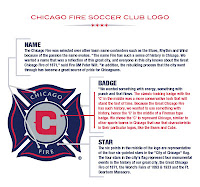 The Chicago Fire logo is derived from the standard shape of a fire department's crest (also shown by the Chicago Fire Department), also known as a Florian's cross. This style was chosen by the original general manager, Peter Wilt, to establish a timeless image evocative of both classic American sports (as in the logos of the NHL Original Six) and the traditions of European soccer.

The logo features a stylized 'C' at its heart (representing Chicago), similar to the logos of the Bears and Cubs. The six points in a ring around the center allude to the six-pointed stars in the Municipal Flag of Chicago, specifically the star commemorating the Great Chicago Fire of 1871.

Nike, the Fire's original equipment supplier, intended for the team to be named the Chicago Rhythm. The Rhythm identity featured a turquoise, black and green color scheme, and a logo adorned with a cobra. Team officials ignored Nike's work, and privately developed the Fire identity with the help of Adrenalin, Inc., a well known sports-specific branding agency.

The original Fire shirts were chosen because of their resemblance to a Chicago fireman's coat, featuring broad horizontal stripes across the torso and sleeves. In the first year, the home jersey was red and white with a silver "FIRE" on the stripe; while the away shirts were white and black in the same style. The jersey has remained remarkably constant ever since, continually maintaining the same format of an all-red shirt with a white horizontal chest stripe, even though changes in equipment sponsor (from Nike, to Puma, and currently adidas). Conversely, the Fire's secondary shirts have changed much over the years from white with black, to white with navy, to white with red, to all-white style and the all-blue currently used. Third shirts have often been yellow (for the Chicago Sting, later for the partnership with Morelia. A popular light blue third shirt was worn in 2005, based on the Municipal Flag of Chicago but was discontinued during the sponsorship change to Adidas the next year.

The club and their fans make frequent use of the symbols of Chicago, as a show of civic pride. Most prominent are the six-pointed Chicago stars, but the light blue color associated with the city, the municipal device, and the city skyline appear regularly on materials produced by the club and its fans. The municipal flag of Chicago is also favored by fans of the club and often seen at the stadium, in a manner akin to the use of the flag of Catalonia for FC Barcelona fans, but without a nationalist subtext.